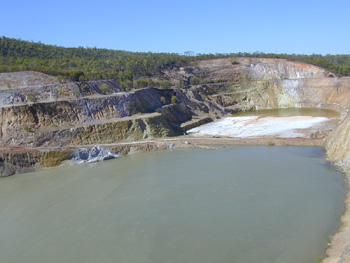 The Pajingo Gold Mine is located approximately 55 km southeast of Charters Towers in northern Queensland, Australia. The Scott Lode deposit was mined by open cut and underground methods between 1987 and 1993. Since then, two smaller deposits have also been mined by open cut and underground methods. Tailings were originally discharged in a paddock style facility and more recently have been discharged into the mined-out Scott Lode Pit.

In 2003, RGC was retained by Newmont Pajingo Pty. Ltd. to carry out a detailed hydrogeological review of the site. The review determined current and potential future impacts of the mine units (waste rock dump, backfilled pit, tailings storage facility) on the local groundwater system and provided recommendations for minimizing future impacts. The review also determined sustainable yields from the production wells in a nearby borefield.

In 2004, RGC conducted a detailed hydrogeological investigation at the Pajingo mine site which included the drilling and installation of 16 additional monitoring bores and hydraulic testing. The data collected during the investigation was used to improve the understanding of the interaction between the local and regional groundwater system and a new groundwater monitoring program was implemented.

Following the field program, RGC was commissioned to re-evaluate the impact of mining activities on the local groundwater system. Management strategies were provided that were aimed at minimizing current and future impacts on the groundwater. RGC continues to assist Newmont Pajingo in routine groundwater monitoring of the site.