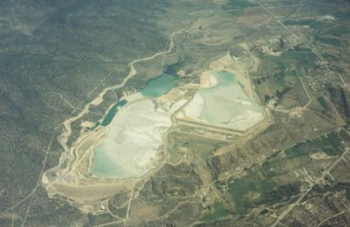 Molycorp Inc. owns and operates a large tailings facility located near the town of Questa, New Mexico. Over the last 33 years a total of nearly 100 million tons of tailings from the Questa Molybdenum Mine have been discharged into this facility covering a total surface area of about 260 ha (640 acres) (as of 1997).

In 1997, RGC was retained by Molycorp Inc. to prepare a Revised Closure Plan for the Questa tailings facility as required under the discharge permit for this site as well as under the New Mexico Mining Act. RGC was responsible for all aspects of the closure plan development including detailed geochemical and hydrogeological site characterization, design of a store-and-release cover system, groundwater quality impact assessment using seepage and groundwater flow modelling, and finally conceptual engineering designs for the closure plan.

RGC further assisted Molycorp during the subsequent permitting process which included formal hearings and informal meetings with a Technical Review Committee (TRC). Under the guidance of RGC staff, a multiple accounts analysis (MAA) was carried out during the TRC meetings to assess alternative closure measures. Dr. Christoph Wels also served as expert witness during the public hearings. In November 2000, the Revised Closure Plan for the Questa tailings facility was accepted by the State of New Mexico.

RGC remained responsible for on-going monitoring and modelling work related to final cover design and assessments of groundwater impacts until 2003.