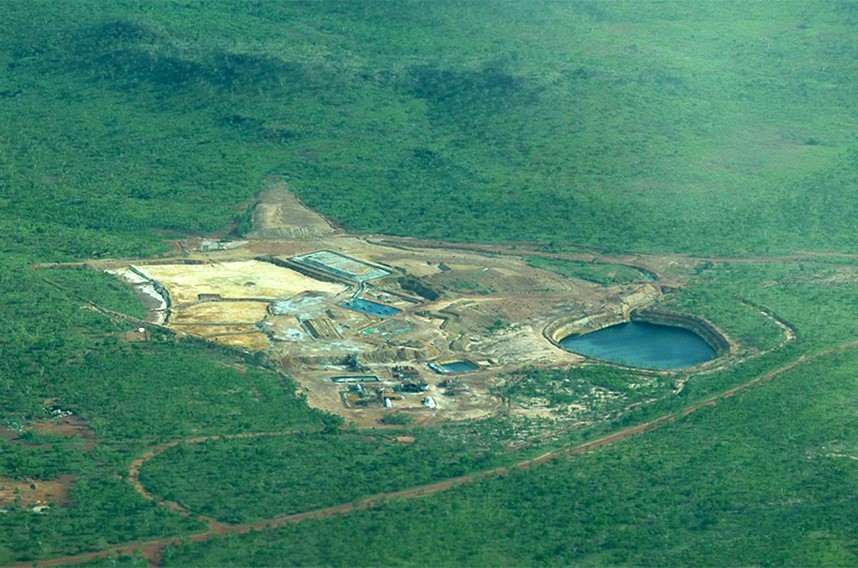 The Sandy Flat Mine Site is located in Australia’s Northern Territory (NT), approximately 30 km from the state border between the NT and Queensland near the town of Borroloola. The site has been surrendered by the previous operator(s) and is now the responsibility of the NT Department of Industry, Trade and Tourism (DITT), which is developing a rehabilitation plan for the site to improve surface water quality downstream and restore the site to a condition that is safe and acceptable to stakeholders. The key features of the site include two historic Waste Rock Dumps (WRDs), a Tailings Storage Facility (TSF), a decommissioned  non-functional water dam, and the flooded Sandy Flat Pit, all of which are related to open pit mining operations in the 1990s. There are also facilities related to a leaching operation from 2004 to 2008, including several Leach Vats (LVs) and Heap Leach Pads (HLPs) that were not decommissioned by the operator and hence are in disrepair. Local groundwater quality at the Sandy Flat Mine Site and surface water quality immediately downstream are severely impacted by Acid and Metalliferous Drainage (AMD) inputs from sulphide-bearing waste rock, tailings, and residual ore in the HLPs and LVs.

In 2021, RGC developed a Conceptual Hydrogeological Model (CHM) and steady-state groundwater model for the site and integrated these models into a Site-Wide WLBM. The Site-Wide WLBM and supporting conceptual and numerical models were developed to improve the DITT’s understanding of contaminant loads from major sources of contaminant sources to the downstream environment. The Site-Wide WLBM is coded in the software GoldSim and incorporates a numerical groundwater model (and CHM) and a hydrological model that simulates streamflow in Hanrahan’s Creek and overland flows from the sub-catchments within the mine site. The model simulates the major flowlines for groundwater and surface water and associated contaminant loads within the confines of the Sandy Flat Mine Site and to Hanrahan’s Creek immediately downstream of the site. The simulation period is a multi-year period (September 2016 to December 2021) during which there were no active water management activities on site. RGC is currently developing a transient groundwater flow and solute transport model to supplant the steady-state model developed in 2021. RGC is also coordinating the installation of additional monitoring wells as part of a hydrogeological field investigation that includes a Sonic drilling program and hydraulic testing program.